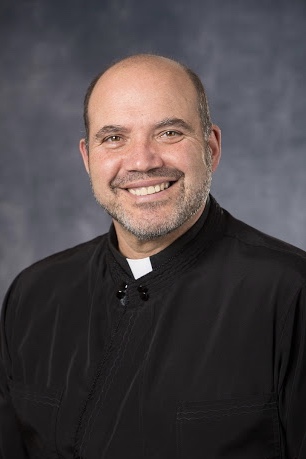 Fr. Dimitrios Moraitis was born in Germany to Greek parents. In 1966 he immigrated to New York where he grew up in the Transfiguration church in Corona, Queens, New York. He was an avid athlete and, at one point, the New York heavyweight wrestling champion. After high school he opted to go into his father's business of general contracting and eventually worked independently as a building engineer. Several years later he went back to school to study social welfare, but realized that God was calling him to the priesthood.

He transferred to Hellenic College, where in 1996 graduated as the valedictorian. During his studies, he was the director of the New York and New Jersey diocese camp, "Camp Good Shepherd." In 1997 he married Flora Hartofilis. In February, 1998 he was ordained a deacon and served the community of Saint Nektarios in Roslindale Massachusetts for several months. His first assignment after his graduation and ordination on May 16, 1998 was at the Saint Demetrios Church in Chicago. After leading all the youth ministries in assisting the Proestamenos for two years, he was assigned to the Saints Constantine and Helen Church in Fayetteville, NC. While there, he served as the contracted chaplain at Fort Bragg before and after 9/11. He also started his doctoral studies at Pittsburgh Theological seminary.

In 2004 he was reassigned to the St. Paraskevi Parish in Greenlawn, New York. It was there he finished his studies and received his Doctor of Ministry degree and, several years later, published his book "Returning the Lost Sheep: Ministry to the Alcoholic and Addict." He guest lectures at the seminary and travels all over the country facilitating seminars and interventions on those addicted.

In November 2014 he transferred to the Saint Spyridon Cathedral in Worcester, MA, to serve as the Cathedral Dean. While there, he began many outreach ministries, including a ministry to the local community in Worcester where he fed the needy and provided necessities.

In 2017 Father Dimitri began serving as the spiritual director of the Washburn House Treatment Center, where he ministered to alcoholics and addicts by assisting them with developing a relationship with their higher power.  In October of 2019 Father Dimitri decided to leave parish ministry to pursue working as a clinician at the same treatment center and as a hospice Chaplin for VNA.

In October 2020 he felt called to return to parish ministry and to become our parish priest.  Father Dimitri loves working with the youth and is fully involved with all of the ministries of the church. He and Presbytera Flora have two adult daughters, Arsenia and Chrisoula.